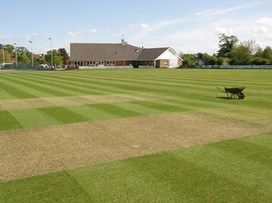 Melksham 1s suffered their 4th defeat in six games after a 10-wicket humiliation away from home at the hands of Devizes 2s; with a 48 from Joe Veacock the only highlight for the visitors.

A severely depleted 1st team were forced to bat first after losing the toss, and things got off to the worst possible start when Daniel Carpenter played onto his stumps without troubling the scorers. Fortunately, Roy Veacock and Russell Collins were able to stabilize the situation, guiding the side to 30-1 after 11 overs.

When the former then departed for 10, the younger Veacock made his way to the crease; who was able to capitalize on some slightly looser Devizes bowling which until that point had been superb. The captain – along with Collins – accelerated the run-rate, reaching a healthy 89-2 by the 22nd over. Collins eventually went for 32 soon after, but nevertheless at the half-way stage Melksham had good reason to be happy with their efforts.

After the drinks break things began to completely fall apart for the visitors. Veacock was among the casualties, falling just 2 runs shy of a 1st fifty of the season; followed by the complete capitulation of the lower order. Sean Hooper, who made 10, was the only subsequent batsmen to make double figures as his side collapsed to 124 all out after 34.5 overs.

A disheartened Melksham took to the field knowing only an astounding bowling performance would be able to salvage a win. Chris Long and Andy Footner began the innings in their usual tight fashion; but the excellent Devizes opening duo of Gary Rogers and James Dunford were happy to bide their time for first few overs, before going on the front foot and ruthlessly punishing any bad balls that came their way.

Veacock experimented with his bowling options in a bid to make a breakthrough, but none was forthcoming. Devizes would reach the target after 23.4 overs to secure a victory which keeps them unbeaten for the season so far. In contrast a disconsolate Melksham side will no doubt be wondering if their ambitions for the season will be restricted to mere survival in Division 4, after yet another disappointing result.

View all posts by melkshamcricket

This site uses Akismet to reduce spam. Learn how your comment data is processed.