Melksham 1s suffered yet another setback in their Division 4 campaign with a heavy 7-wicket defeat at home to Royal Wootton Bassett 2s, with the team undone by yet another disastrous batting collapse.

Weary of the severe heat that would likely be a factor throughout the day, skipper Joe Veacock elected to bat first after winning the toss. This initially appeared to have been the wrong call however when Melksham suffered two early blows: first opener Freddie Honeybone was bowled for 1; then Russell Collins followed soon after in a similar fashion for just 6. It was subsequently left to father-and-son duo Roy and Joe Veacock to recover from this early setback, and the two thankfully succeeded in stopping any further rot. However, runs proved to be extremely hard to come by on a surface that generated little bounce; and with Wootton Bassett bowling a tight line and length, pressure soon told with the scoreboard far from ticking over regularly. After 22 overs Melksham had only accumulated a meagre 60 runs.

The innings then suddenly unravelled when Joe Veacock was bowled for 30. The necessity to up the run-rate soon took its toll on the batsmen who followed him, with the likes of Roy Veacock (18), AJ Hobbs (3), and Chris Singh (1) all dismissed attempting some extravagant shots. Daniel Carpenter (5) also went soon after, leaving the vulnerable tail well and truly exposed; with Wootton Bassett wasting little time in mopping it up. When the last wicket fell Melksham had finished on an embarrassing 83 off 34.4 overs, a total that even on such a difficult wicket would almost certainly be nigh-impossible to defend.

The start of Wootton Bassett’s innings did serve to inject the home side with some optimism, with Andy Footner trapping both openers LBW to leave the visitors 9-2 off 7. Footner and his fellow opener Gary Ings were exceptional in the first dozen overs; with the latter especially impressive, only conceding 5 runs in his 6 overs which included 4 maidens. Sadly, Melksham could not follow up their early success with more quick wickets; and although Wootton Bassett were not exactly sprinting towards the target, it was quickly evident that Melksham’s early breakthroughs were something of a false dawn. Chris Singh did claim one more wicket for his side, but Wootton Bassett nevertheless reached their target within 30 overs.

A sixth defeat in nine games leaves Melksham languishing just one place above the Division 4 relegation zone, albeit with a fairly healthy points cushion between themselves and the team below. The team will certainly be hoping that the approaching second half of the season will yield far more success than the disappointing first half has.

Melksham Cricket Club would like to thank Rich Hemmings Window Cleaning Services for their kind sponsorship of this match. 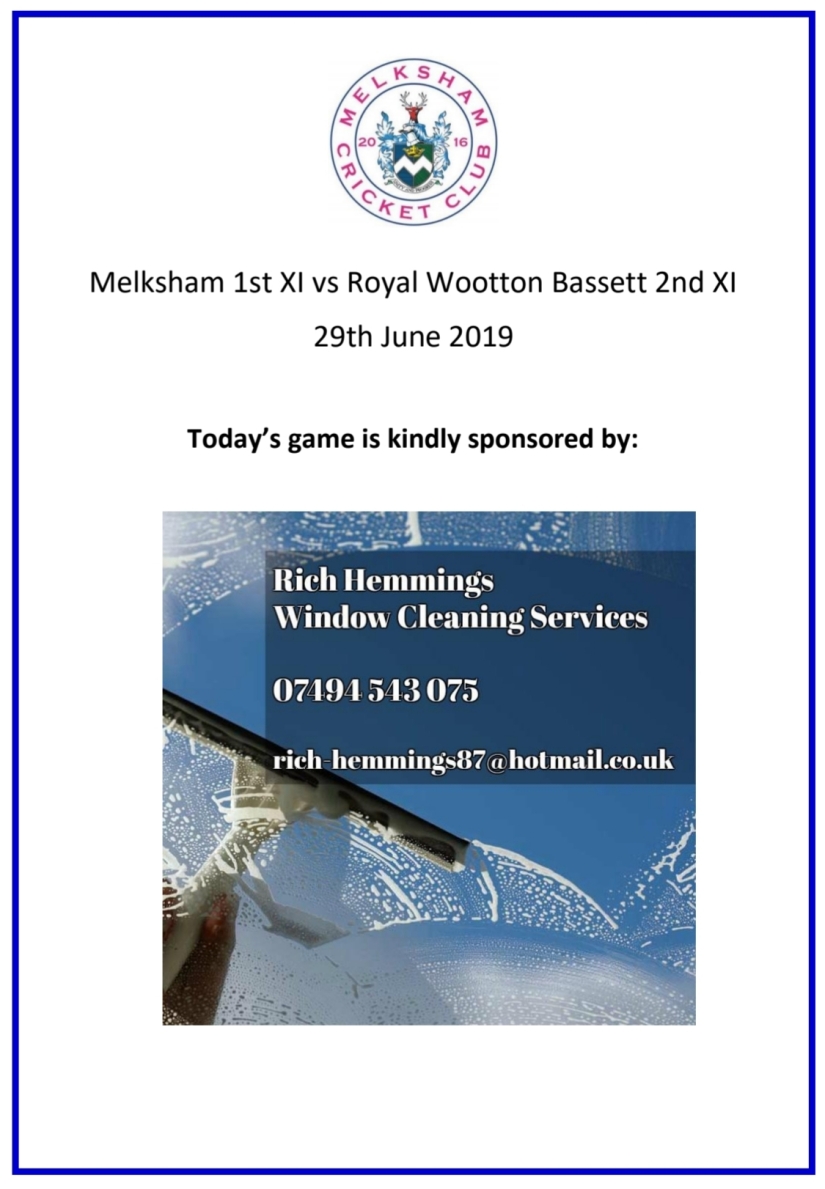 View all posts by melkshamcricket

This site uses Akismet to reduce spam. Learn how your comment data is processed.